Budget instrument maker Vangoa has taken the hassle out of getting a PSU for your pedalboard by cleverly building one into the chassis of a very svelte and stylish ’board – just don’t ask about the light show.

Go and have a look at your pedalboard. It’s okay, we’ll wait. Turn it over, and what do you see? Unless you’re one of those people who have too much time on their hands and spend their free time reading cable management threads on Reddit, chances are that you’ll see a power supply Velcroed or cable-tied to the bottom of the board in some haphazard fashion. Or maybe you’re a daisy chain weirdo – no judgement!

But what if there was a better way? What if instead of the hassle and expense of having to buy a pedalboard and separate PSU, there was a way to combine those things in a beautiful marriage of form and function? The Vangoa Power Pedalboard is probably not the first pedalboard with a built-in power supply – that’s probably the venerable (and recently reborn) Boss BCB range – but this is a much sleeker and more modern proposition.

Hewn from aerospace aluminium, the Power Pedalboard is roughly the size and general profile of a Pedaltrain Nano but much thinner and without the bulky rubber feet, creating a much smaller slanted profile on the floor that’s perfect for gigging. Should you want an even steeper angle, the board has two feet that can be pulled out from the rear. They look a little flimsy but we gave them a good stomping and they held their own – we’re not totally convinced that will still be the case after months or years of use, however.

The top rail here is where the magic happens – rather than hollow aluminium we have a solid block in which you’ll find the Power Pedalboard’s USP – a fully isolated, fully integrated power supply with eight outputs of the standard 9V centre-negative configuration.

The top edge of the board contains perhaps the most unique and baffling feature of this board – a strip of coloured LEDs that are sound-sensitive, triggered either by the onboard mic or by plugging your signal directly into it (the top edge has input and output jacks for this purpose). The louder your signal, the more lights will light up, and there’s a knob to adjust the sensitivity depending on your playing style – it’s a bit weird, more on that later.

Elsewhere in the package you also get eight right-angled cables for plugging your pedals in, two pre-cut strips of velcro to attach your pedal, a (US-only) PSU for the board itself and a semi-soft gigbag. Everything a growing pedal-head needs? Let’s dive in. 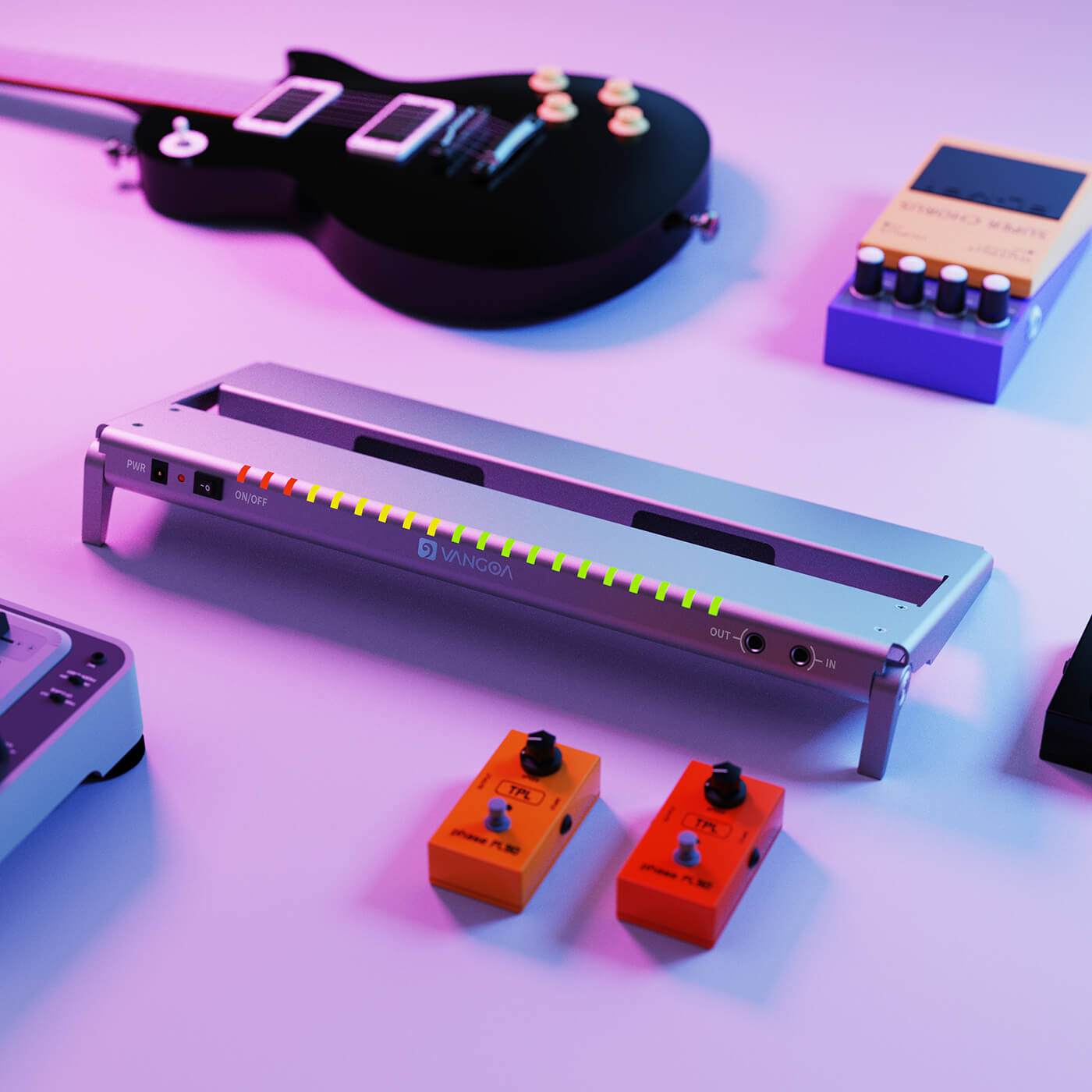 It’s always best to begin any appraisal of a product by talking about what it is rather than what it isn’t, and for the money this feels like a very well designed and appointed pedalboard. The aluminium frame is rugged and stylish, the angle of the board is very gig-friendly, and the positioning of those power outlets is perfect to hook up to your effects pedals – even though the most we manage to fit on there is six pedals, having eight outlets allows you to line things up very neatly should you be that way inclined.

Plugging in and getting stomping, the outputs prove to be well isolated, with no noise issues at play even with all our pedals engaged. The supplied gigbag is a little small when you factor in the supplied laptop-style PSU for the board itself, and fitting it in with all the pedals was a challenge, but we really like that it features an extra velcro fastening that wraps around the neck of your gig bag meaning your hands can be unburdened for lugging guitar amps or what have you into the venue.

And chances are you’ll be wanting that amp, because there’s no way you’ll be able to use any of the increasingly popular and viable pedalboard amps on the market with the Power Pedalboard, which brings us, sadly, to the Achilles heel of this product.

Part of the reason why compact boards have come back into fashion in recent years is that clever pedal makers have managed to squeeze more and more high-end DSP into smaller and smaller enclosures than ever. It offers compact-sized pedals huge amounts of sonic versatility – but at a cost, and that cost is power. All eight of the Power Pedalboard’s outputs offer just 100mA of current to power your pedals.

This might have been acceptable 10 or 15 years ago, but in 2022 it’s positively miserly to the point of it being a deal-breaker. How limiting is it? Well, you can forget about anything Strymon for a start, as even its relatively smaller pedals such as the Blue Sky reverb demand a minimum of 250mA. Fancy trying out a Walrus pedal or two? Well you might just be able to squeeze in a dirtbox like the Eons (100mA) but you’re shit outta luck with the new Mira Optical Compressor (200mA) and don’t even bother with any of the impressive Mako series pedals – they may be stompbox-sized by you’ll need at least 300mA to power them.

Fancy getting weird? Well unfortunately Chase Bliss’ superlative Habit and Generation Loss Mk II require 150 and 200mA respectively, so it’s back to the drawing board. Finally, remember that aforementioned notion of going amp-free? Well you won’t be doing it with the impressive Universal Audio amp emulator pedals, as they require a whopping 400mA on their own.

We may be labouring the point a bit there, but it’s important to appreciate what a limiting and problematic issue this is for guitarists in 2022. There is a workaround, of sorts – Vangoa tells us that the PSU’s supply is 800mA in total and the current is not limited to 100mA per output, so you could theoretically squeeze a higher DSP pedal on there with the understanding that it will suck up a lion’s share of the available current, and hope you have enough leftover to power your other pedals, but it feels like a compromise at best.

After all, it’s not like you can simply upgrade this PSU like on a normal board – you’re stuck with it.

It’s a perplexing decision, and one rendered even more puzzling when you consider the comparatively pointless LED light show on the pedal’s top side. Yeah it’s quite novel to see your signal represented in visual style, but it’s the sort of needless embellishment that only makes sense if the core product ticks all the boxes. Instead this pointless addition takes up significant internal space that could have been better spent cramming in a more robust and scalable power supply.

If you only ever plan to use dirt pedals and a few basic budget stompboxes, the Power Pedalboard could be a good investment, as the basic concept here is a strong one. For the rest of us however, it’s a great idea hamstrung by some baffling design decisions. 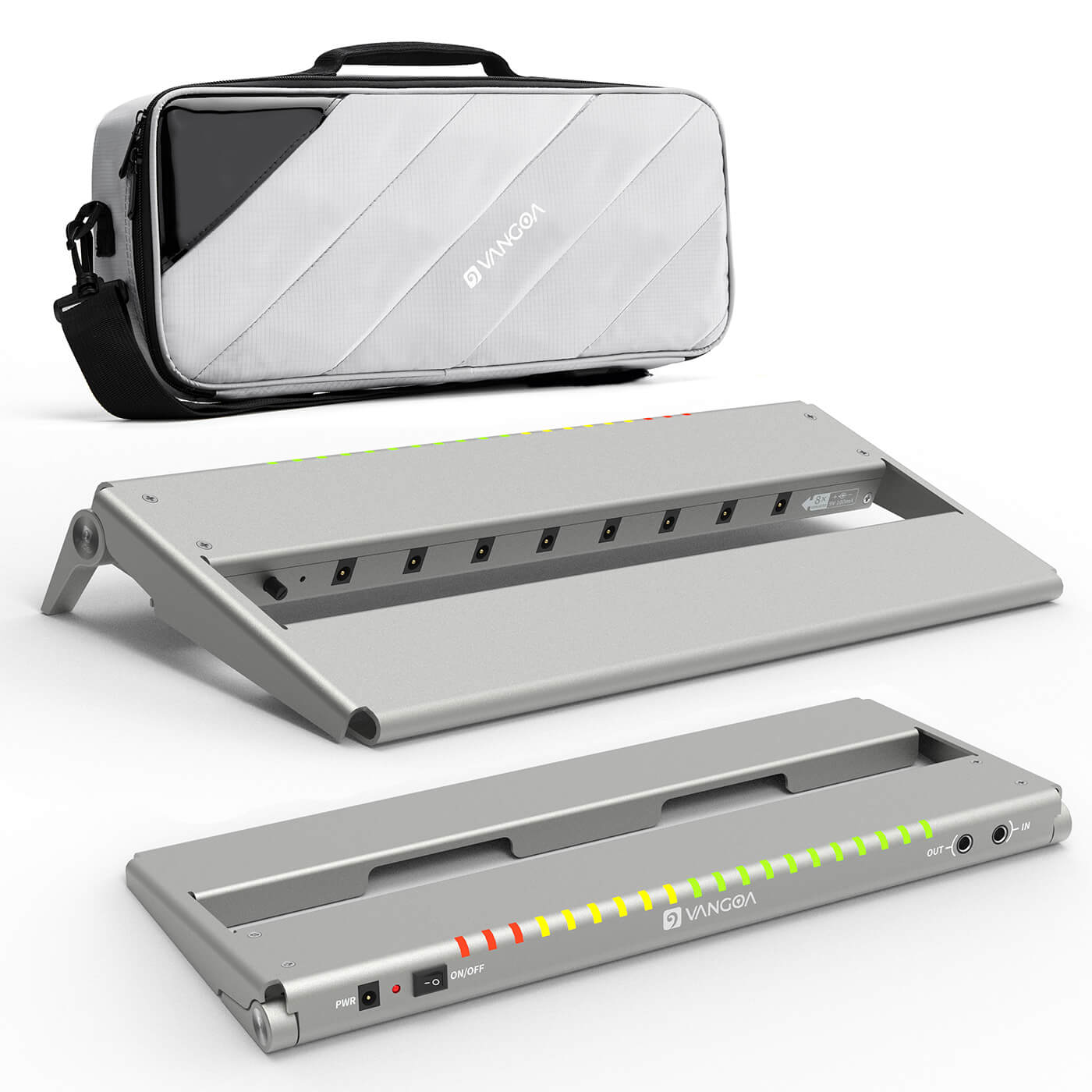